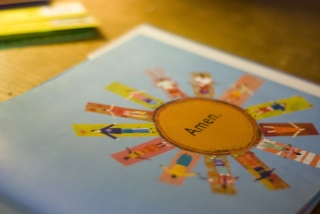 Can I hear an ‘amen?’
For the past two weeks, we’ve rested upon the Lord’s Prayer and taken it sentence by sentence in our prayer study. I’m saying ‘our’ because I realize many have joined with me the past two weeks to glean what we can from Jesus’ instruction on prayer.
What have we learned?

What will we apply after this time?
What won’t we ever forget?

I’d love to sit and listen to those of you who’ve joined me this week and hear what the Lord said to you through His word. I absolutely LOVE joining together with fellow Christ-followers and learning what they are learning about their Savior and their God! I haven’t been able to do that very much this year because of my homeschooling schedule. However, what this season has afforded me is time for personal study and personal growth through God’s intimate Word.
For today, I want to focus on a single word. It is a word that comes after nearly every spoken and unspoken prayer. You know it, don’t you?
You’ve said it, haven’t you?
Amen!
Did you know that ‘amen’ is quite a remarkable word? Amen was transliterated directly from the Hebrew language to the Greek language in the New Testament. Then it was transliterated directly into Latin and finally into English and many other languages of the world. Therefore ‘amen’ is one of those very rare universal words. It has been called the best known word in human speech!
So what does ‘amen’ mean? The word is almost identical to the Hebrew word for ‘believe’ which is amam or faithful. Over time it came to mean, “sure,” or “truly.” It became an expression of absolute trust and confidence.
In Hebrew, you’ll read it as אמן . To give a little more breadth to this word, it also means to stand firm, remain firm, to be established and to trust.
The Greek word, amēn is defined as firm and faithful. When some one said ‘amēn’ they were saying
Let it be so
So be it
May it be fulfilled
Saying ‘amen’ was a custom first begun in the synagogue. Over time, it passed over to the early church. When a letter, word, or prayer was shared before a believing assembly, they responded ‘amen,’ indicating their trust, belief and acceptance of this offering as if it was their own word or thought.
So, for those of us who have spent the past two weeks in the Lord’s Prayer, it is my hope that the Lord’s Prayer is firmly established in our hearts and minds. As we pray, we believe and trust in its words. I pray its words are fulfilled in our lives as we pray
Our Father in heaven

Hallowed be your name
Your kingdom come
Your will be done
On earth as it is in heaven
Give us today our daily bread
Forgive us our debts
As we forgive our trespassers
And lead us not into temptation
But deliver us from evil
For Yours is the kingdom, the power, and the glory forever.
Amen

In closing, I would like to share the Lord’s Prayer as sung by Andrea Bocelli.
Enjoy and Amen!….and believe!!!