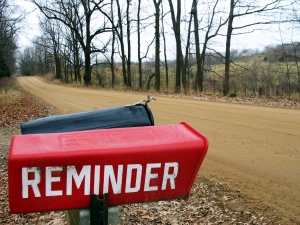 It would have been easy to skip over this verse and go onto the next verse in my trust study. After all, I had already addressed the mistrust of the Israelites yesterday. Yet, as I wrote the words in my journal, I was hit with this thought: Moses wrote these words in Deuteronomy 9 again for a reason. Moses chose to remind the stubborn Israelite nation of their unbelief. It was their mistrust that had prevented them from entering God’s land of promise at the very beginning of their desert journey. Moses wanted them to remember that.

Had they trusted their God in the beginning, their 40 year desert meandering would never have happened. Their fear and lack of belief kept them from obeying the word of their God.

And when the Lord sent you out from Kadesh Barnea, he said, “Go up and take possession of the land I have given you.” But you rebelled against the command of the Lord your God. You did not trust him or obey him. Deuteronomy 9:23 NIV

This people surveyed their own limited resources instead of surveying the unlimited power and resources of their God. Their failure to trust their God and their suspicion of His goodness and abilities stopped this moving mass of people in their tracks. They refused to take another step.

Now, why would I revisit this mistrusting people again so soon after writing about them yesterday?

Because I am just as vulnerable to doubt and mistrust; especially when the future is uncertain. At the core of this mistrust or unbelief is sin. It was their sin against God that separated the Israelites from the land of promise and the land of their God.

I have to be honest. Sin separates me from what my God has for me too.

Let me give you an example. In April, my oncologist declared I was cancer-free. He told me to go and live life and not worry about cancer. Then, three months later, last week in fact, a suspicious mass was found during my mammogram. I was instructed to have a biopsy to determine what kind of mass this indeterminate tissue was inside of me.

I entered a battle of the mind last week. Thoughts of cancer’s possible return and all of its ramifications verses hoping that the mass was benign fought for control of my heart, soul and spirit. I chose to hope that it was benign. Thankfully, the mass turned out to be damaged tissue from last year’s radiation treatments. This wasn’t a fun week for me to the say the least, but receiving the news that I am still cancer-free was both a relief and a huge praise.

So, how does this relate to the Israelites?

Did the LORD ever tell me that I was cancer-free?

Yet, His word instructs me to trust Him with my life.

I have the option of living my life trusting in the goodness and care of my God although living with the fact that a reoccurrence of cancer could happen at any time. Or I can live my life under an oppressive cancer death sentence – thinking that cancer is ever-ready to destroy me.

My God offers me life today.

I have no idea what is ahead. Yet, I refuse to be chained by disbelief, fear or worry. I embrace these words:

…they cried to the LORD in their trouble,

and he saved them from their distress.

He sent forth his word and healed them;

He rescued them from the grave.

Let them give thanks to the LORD for his unfailing love

and his wonderful deeds for men.

Let them sacrifice thanks offerings

Why did I return to the wandering exiles today?

Because I want to be reminded that I am just as capable of being lost, fearful and worried about my uncertain future after cancer.

I don’t have to be afraid though. I am not lost. I have been found by my Savior and Lord Jesus Christ. He will show me the way forward to the PromiseLand that is ahead. I will remain hopeful and look ahead with expectation and peace and I won’t worry about cancer’s return. Instead, I choose to live with a thankful, joyful heart and spirit.

Thank you, Moses, for the reminder.