Nelson Mandela’s Houghton home stands about seven miles away from our house.

In almost eight years of living in Johannesburg, South Africa, our family has never had an occasion or reason to search out the location of this famous home; until today.

December 8, 2013 has been declared a national day of prayer and remembrance in honor of Nelson Rolihlahla Mandela in South Africa. Churches, synagogues, temples, mosques, and other sites have dedicated the day to honoring this man of reconciliation and praying for his legacy to continue in his homeland, nation and world.

Our family rose early this morning to make our way to the corner 4th and 12th streets in Houghton where Nelson Mandela spent his final days. Memorial sights have been designated across the country. However, many people are choosing to pay their respects outside the former President’s Houghton home.

Our family arrived at 6:45 a.m. We chose to go early because we wanted our children to be able to see the memorial without too big of a crowd. Among us were dozens and dozens of joggers who had chosen to do a memorial run to Mandela’s home this morning. In addition, there were bicyclists who pedaled their way to the gathering place. Families with young children still in their pajamas were there. Employers stood side by side their domestic workers whom they had brought to view the colorful scene of flowers, notes, candles and artwork of remembrance. There was a strong police presence along with local and international news teams. 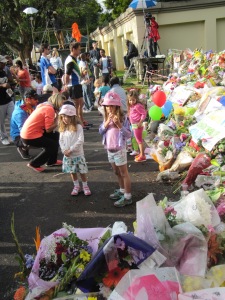 The old, the young, and the middle-aged stood together regardless of their skin color.  Some people even brought their dogs. The memorial grew significantly in the short time we were there. There is no doubt that it will grow exponentially as more people make their way to the corner of 4th and 12th.

There was no singing or dancing at this early hour. Instead, the mood was somber and quiet. Many took photos. However, the prevailing spirit of the place was a silent recognition of the sacrifice and service this man had made for the betterment of his country and the world. 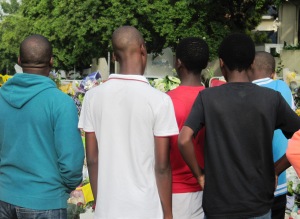 There have been words of opposition written and said in the past few days. There was none of that here. Not this day. Not at this time.

Instead, this was a time to bless the memory of a man of humble beginnings who recognized the great worth of every human being and gave his life at great personal cost to bring reconciliation and hope to his nation.

South Africa will celebrate 20 years of democracy in 2014. There have been great triumphs and yes, there have been continued setbacks and significant struggles. For the first time since this democracy began, it goes forward without its first leader, Nelson Mandela. As we commemorate this man, we pray for his legacy to remain in the hearts of those who lived during his lifespan. We pray his example of joy, humility and service are ignited in the hearts of South Africa’s children who will follow.

As for our children, Micah, Jake and Caleb, we pray that being in South Africa at such a time when the entire nation stopped to honor one man, and where every single nation of the world, turned to recognize this man as well,  will remember what an amazing time it was to be here. Amazing. We pray they are inspired to live their lives in service and care of others following the example of Nelson Mandela and their Savior, Jesus Christ..

As we drove away, Caleb remarked, “I’m glad we came.”

For those of you who support our family in ministry, thank you for making such an incredible, once-in-a-lifetime experience possible for us. This is not lost upon us and we share this day with you.