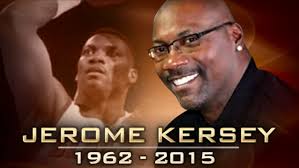 Living overseas for as long as we have, we’ve come to accept that hard, distressing news often appears in the morning. We are nine to ten hours ahead of the majority of our family and friends who live in the Pacific Northwest. As we update our email, Facebook, or Whatsapp each day, we learn what has occurred in the past twelve or so hours that we may not have expected nor wanted.

To be honest, it’s like a punch in the gut when we receive difficult, painful or unpleasant news first thing in the morning.

Last week’s hit wasn’t about a family member or even a close friend. It was an athlete. To be honest with you, I’ve surprised myself that I’ve taken the loss of this man so personally. He was a little older than me. He was a whole lot taller – like a giant. He had a massive heart that beat for others. His smile was genuine. How I came to know him and come to admire him was through his career as a Portland Trailblazer.

His name was Jerome Kersey.

He passed away suddenly last week. It is believed that the cause of death was due to pulmonary embolism when a blood clot traveled up his left calf to his lungs. He was here one day, and then all of a sudden – he wasn’t. When John and I heard the news on Thursday morning, we couldn’t believe it.

In the early 90s, the Trailblazers were a team to be reckoned with in the NBA. They reached the NBA finals twice – only to be thwarted by ‘some guy’ and the Chicago Bulls. I was a sixth grade teacher at William Walker Elementary in Beaverton, Oregon at that time. Our little elementary school stood across the street from Kevin Duckworth’s house. Duckworth was the Blazer center.

During those years, the Blazers had a reading incentive program. It recognized fifth and sixth grade students for their reading progress and gave the kids complimentary tickets to their home games. It was a different time, but back then, as one of the fifth and sixth grade Wm Walker teachers, I was able to take those eager and awestruck kids to those Blazer games. After the games, I guided the boys and girls down to the court where the players waited to sign autographs and take pictures with the kids. Jerome was usually there. Terry Porter, Duckworth, Clyde Drexler, and Buck Williams were there too. I never asked for an autograph. I never went forward for a picture. So I don’t have any thing to share with you. But, I bet some of those kids (who are in their thirties now) still do.

During the finals against the Bulls, our school decorated the outside of our classroom portables with signs of “Go Blazers!” or “Rip City” or “We’re with you, Kevin!” to greet Duckworth on his way. On game days, we wore red and black – of course we did.

Our hearts and our hopes were with these guys.

They were a team we identified with. I confess that I didn’t have a problem with any of my students emulating the character of many of these men. I still don’t.

For me personally, as I remember this era – especially the early nineties – it was a time of new beginnings. Surrounded by an incredibly supportive family, an amazing William Walker staff who genuinely cared about me, and a new group of friends called the Roaring 20’s at Sunset Presbyterian Church, my life was taking off – just like the Blazers.

I was having fun again.

And part of that fun was watching the Blazers play all-in basketball.

The Blazers were a team that not only I, but the whole city of Portland could rally behind because they were genuine – the real deal. And Jerome Kersey was in the middle of it all.

Jerome Kersey’s former coach Rick Adelman said this past week, “Jerome never quit. He was someone you could count on every time he stepped on the court. He was just such a rock for those special Trail Blazers teams. He also cared about the community and was always giving back.”

Terry Porter shared, “As a teammate he was the best teammate you could have. He’d run through walls for you. He got every ounce out of his talent that was humanly possible.”

And maybe that’s one of the reasons why I’ve been so touched by this man’s passing this past week. I knew that Jerome was some one who wouldn’t let barriers of any kind get between him and some one he loved or in a project for which he believed. He put his whole heart into everything he did.

At a time in my life, when I needed the support of family and the camaraderie of friends, Jerome and the Blazers were there too. I look back on that period in my life with great warmth and tremendous gratitude – I found friends and ultimately John – who would be there to run through walls for me, who would live with me – all-in – to this day.

But I don’t need to. Jerome and the Blazers wrote inspiration and courage on my heart at a key juncture in my life. Friends and family gathered with me to root Jerome and the Blazers on – and in so doing their love, acceptance and care of me, rooted me on as well. I know I’m here because of that love and care. I don’t forget that. 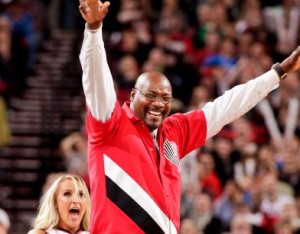 Thank you, Jerome. We never knew each other. However, your life meant something to me. You inspired me and so many others to take life on and run at it with joy, with gratitude, with tenacity, with generosity and with everything we’ve got. It’s how I live. And like you – someday – it’s how I will die.

Photos  images gathered from a Google search on Jerome Kersey