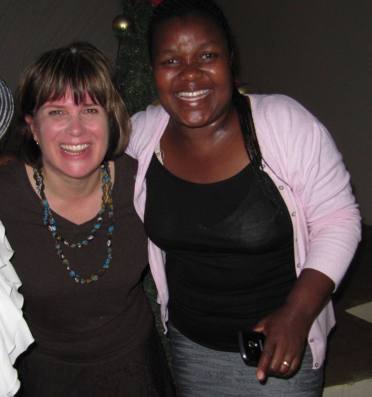 For the past ten years, I have experienced life as a minority.

During my childhood and for much of my adult life, I resided in Oregon. According to a 2013 US Census Quick Facts document, 88.1% of Oregon’s population is currently designated as “white alone.” This is the skin color context of my life – surrounded by people who primarily looked like me.

Ten years ago, that changed.

Our family relocated to South Africa where we would dedicate our hearts to serving southern African pastors, ministry leaders and educators for as long as our God required of us. As we stepped off our United Airlines jet ten years ago, we became immersed in a country of diverse, warm and rich, brown skin tones. According to the Statistics of South Africa Census which was completed in 2011 and of which our family took part, 79.2% of the South African population is black. 8.9% are documented as Coloured – a mixture of indigenous African, white, Indian and other races. 2.5 % are of Indian, Chinese or of  other Asian descent. And last of all, 8.9 % are documented as white/Caucasian. This means that over ninety percent of South Africa’s 52+ million population looks and often acts differently than I do.  Am I bothered by that?

I have discovered that living in a nation where the majority of people have rich skin color tones of chestnut, copper, burnt orange, sienna, tumbleweed, tan, black, and brown to be the delight of my heart.

The color of their skin is not just ‘black’ to me.

Being back in the States for a short time, I have heard more and more about the ‘Black Lives Matter’
movement. The voices of this movement declare that black citizens in the United States have historically been devalued, demoralized, and discounted. They also contend that black citizens are more likely than white citizens to be racially profiled by police and then killed in a police encounter. They have the documented evidence to support this tragic claim over many decades.

I am not going to spend a lot of time on the Black Lives Matter movement in this blog post, because I imagine that their purpose is not to say that one race’s life is more precious than another as has been suggested.

What are they saying?

They are saying, “Look at me!”

They are inquiring, “Do you see me?”

They are asking, “Will you get to know me?”

They are pleading, “Will you value me?”

And I bet, if we really looked at and studied the color of their skin, we wouldn’t just see black skin. We would see a kaleidoscope of colorful shades of tan, brown and black.

And it wouldn’t just be shades of skin color that we would notice, we would be introduced to the convictions of their hearts, the incredible landscape of their dreams, and the beauty and magnificence of their character.

A long, long time ago, a man named Peter was asked by his God to confront the racial profiling and prejudicial barriers that were prevalent in his Jewish culture. His God didn’t ask him to go – his God told him to go – and enter the house of a Gentile. At this time, it was forbidden for a Jewish man to associate with a Gentile in any way. In fact, it was scandalous. No Gentile life was considered worthy of a Jewish person’s time or attention.

Peter, an apostle of Jesus Christ, was tasked with the first step of sharing the Gospel with some one very different than himself. He would share Jesus Christ with some one whom his Jewish culture had reinforced did not matter. This small step would catalyze the beginning of a movement: Gentile Lives Matter.

By the grace of God and the leading of the Holy Spirit, Peter set aside his deep-seated, racial and cultural taboos and chose to embrace the new vision – the Good News of Jesus Christ – was a gift for everyone!

“Talking with him,” Peter went inside and found a large gathering of people. He said to them, “You are well aware that it against our law for a Jew to associate with a Gentile or visit him. But God has shown me that I should not call any man impure or unclean.” New International Version, Acts 10: 27-28

Peter now understood that in Christ there were no barriers! Language, culture, race, prejudice, geography, socio-economic, education, gender, or mental or physical capability could no longer prevent followers of Jesus Christ from interacting with and sharing the Good News of Christ. The lives of everyone mattered. Everyone deserved an opportunity to be known, to be loved and to be embraced by Jesus Christ and by those that call Him, Lord.

Friends, just as in the times of Peter, divisive words and misguided cultural beliefs are hindering us in sharing the love of Jesus Christ. I believe that if we would stop what we are doing and take the time to enter the homes of our neighbors and others in our sphere of influence, we would see more, understand more, and care more about them. We would apply more than a broad brush stroke to our neighbor’s or co-worker’s lives and better observe the intricate details of their struggle and need.

Peter took a step and entered the home of some one he did not know and had never understood. As a result, the Kingdom of Jesus Christ advanced in a mighty and profound way.

What will we do?

Will we take the time to enter the homes of our neighbors and introduce them to Jesus Christ?

Will we help them intimately know, love and worship Christ?

Will we put aside and ultimately dismantle and destroy any cultural barriers that we have built in order to understand our neighbors and to conform our lives to Jesus Christ?

Will we pray and keep on praying for opportunities to advance the Kingdom of Christ as He leads us – no matter where He asks us to go and to whom He asks us to serve?

Living in a land where I am a minority has helped me see a nation of people in a very unique and incredible way – they must be described more than for just the color of their skin. Their lives are much more significant, rich and amazing than that.

And so are the lives of us all – whether red, yellow, black or white.