At some juncture in my life, I’m really not sure when, I learned a life lesson that I would embrace wholeheartedly.

I remember choosing to be someone who would strive to be an encourager. I wanted to look for the joy and the blessing in a situation, rather than the hardship or challenge. If something was particularly difficult, I would buckle down and make my way through it. Complaining, criticizing, protesting, grousing, grieving and griping were behaviors I steered away from – far far far away  – especially in a public way. I decided to be a hope-filled person.

This decision to be positive and affirming rather than negative and dissatisfied has served me well for much of my life. I have become an encourager. Blessing someone with a strengthening word gives me a sense of joy and purpose. It’s who I am. It’s how I want to live.

However, there is a down-side to being little Miss Pollyanna. I developed a pattern of people-pleasing. Rather than address the grievances and gripes that would occur in my life, I stuffed them – down deep. Unfortunately, those undealt feelings have a way of surfacing at the most inopportune times. Frustrated sleeping patterns, stress induced illness, anxiety and maybe even my breast cancer in 2012 have resulted because of not giving voice to the hurts and injustices I have experienced.

Am I doing better at that?

I will err on the side of building up and encouraging rather than complaining and criticizing in most situations. But that doesn’t mean, and I mean this sincerely, that there isn’t a time to voice our concerns and objections.

In studying the word hope in the Old Testament and camping in the book of Job at the moment, I see again and again how Job struggled with injustice.

Everything that mattered most to Job had been inexplicably removed. Even his character and integrity were called into question as reason for his calamitous life. To make matters worse, his body was riddled with an infectious skin disease. Every part of his being was under siege – his heart, his soul, his skin, his identity, his view of himself and his God. Job experienced no relief.

He said, “My days are swifter than a weaver’s shuttle, and they come to an end without hope. Remember, O God, that my life is but a breath; my eyes will never see happiness again.” New International Version, Job 7: 6-7

In his lament, Job uses the Hebrew transliterated word tiqvah. Tiqvah comes from the word cord.  Tiqvah is the cord that had been cut or removed from Job’s life. He wasn’t eve hanging by a thread. 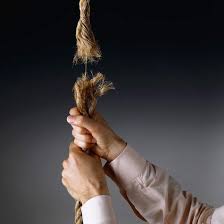 The cord of hope that once tied Job to his identity and purpose, to his family, to his livelihood and way of life, and to his God had been severed.

To state that he will never see happiness again means that the joy, favor, and right and good life he once enjoyed is gone to him forever. Once secure in his hope and understanding of his God, Job doesn’t know what to hang onto now.

Job has become a man without hope.

Is there anything worse in life?

I began this hope study with the intent of understanding what hope meant in biblical terms. I also wanted to discover a pathway to hope that I could identify to encourage my family and friends in their perilous times. From my view, I see many people who I love and hold dear without a sense of hope these days.

What can be done?

As I shared in an earlier blog post, I was surprised to find that the book of Job contained so many hope verses. As a result, I assumed I would read verses of how Job demonstrated hope in spite of his ruinous, tragic life.

It hasn’t been that way.

Job’s faith is sure, there’s no doubt in that. However, his words convey a shattered hope.

Isn’t that an oxymoron?

How can you have a sure faith and trust in God, and yet feel hopeless?

In all honesty, I am encouraged by that. Authentic and real about his incomprehensible struggles and pain, his losses cut deeply – nearly destroying him.

Why wouldn’t Job feel like his cord of hope – that bound him to his God – had disintegrated?

Job couldn’t just buckle down and make his way through this time – believing it would all get better and his life and family would return to him.

His children were dead. They were not coming back.

The gaping expanse of grief had not only swallowed him, but was chewing him up.

Has there ever been a time when you hurt so badly that you didn’t know if you would ever see the Light of day again?

Has there ever been a time that you felt so lost and alone in your pain that next to nothing encouraged you?

Has there ever been a time when your life exploded and its scattered remnants were so unidentifiable that you knew you would never be able to reassemble them? Ever?

Has there ever been a time when you received a word – whether a diagnosis, a firing, or a relational ending – that everything you once held onto was no more?

These are just some examples of what it feels like to lose your cord of hope.

How do we respond when the cord we once held so assuredly is beyond our reach?

What did Job do?

He identified the reality of it all.

He didn’t side-step it.

He didn’t gloss over it.

He didn’t ‘Miss Pollyanna’ it.

He voiced his hurt and his depravity to his God.

Did you catch that?

Job told his God that he felt like his cord of hope had been lost.

Job didn’t deny God’s Presence or power, nor did he cast blame upon Him. Yet, that didn’t mean he didn’t tell God how alone, how devastated, and how abandoned he felt.

Do you do that?

When your world turns upside-down, over and under, inside and out, and feel completely cut-off, do you go to God with your complaints, your hurts, and your injustices?

Do you believe it would make a difference?

For Job, there was nowhere else to turn. He wanted his cord of hope back – without it – Job was lost.

That’s what we need, right?

We need our God to extend to us the cord of hope – with His hand on one end and ours on the other.

Otherwise, what will we hold onto when our lives darken under the shadow of loss, betrayal, failure, and pain?

So, does Job get his cord of hope back?

There’s more to come as God reveals Himself to Job even as Job continues in his lament.

How is your God offering the cord of hope to you this week?

1 thought on “Is There Anything Worse in Life?”